Thanks to its lovely beaches, scenic views and relaxed atmosphere, Changi Village is one of Singapore’s most beloved neighbourhoods — a popular spot for both locals and tourists alike. Grab your bags, hop on a bus to Changi Village and say hello to the people of Changi Village!

Changi district’s history dates back to the 17th century when it was known as ‘Tanjong Rusa’ to locals. The district was largely rural until the 19th century when coconut and sago plantations were established.

In 1927, the British Army decided to develop Changi as a military base. The Changi Cantonment was completed in 1941 following 15 years of on-off construction. As Japan’s expansionist ambitions became apparent in the early 1930s, the construction of Changi Cantonment fortified Singapore as the “Gibraltar of the East”. A cluster of settlements collectively known as Changi Village spawned outside the Cantonment to cater to the needs of the growing military population and their families, serving as their go-to place for recreation and provision shopping.

Post WWII, Changi Beach was rebranded as a recreational area equipped with holiday bungalows for weekend retreats. Changi Village became well-known as a place for bargain hunters with a street market in the village and a movie screening area. This, however, changed when the British announced their withdrawal from Singapore in 1972. As the British left, so did many residents and businesses in Changi Village.

This was when the Singapore Government chose to rebrand Changi Village as a local resort destination. This ambitious “new lease of life” plan featured a housing estate with a modern market and hawker centre. The street markets were cleared to make way for hawker centres and other commercial developments. 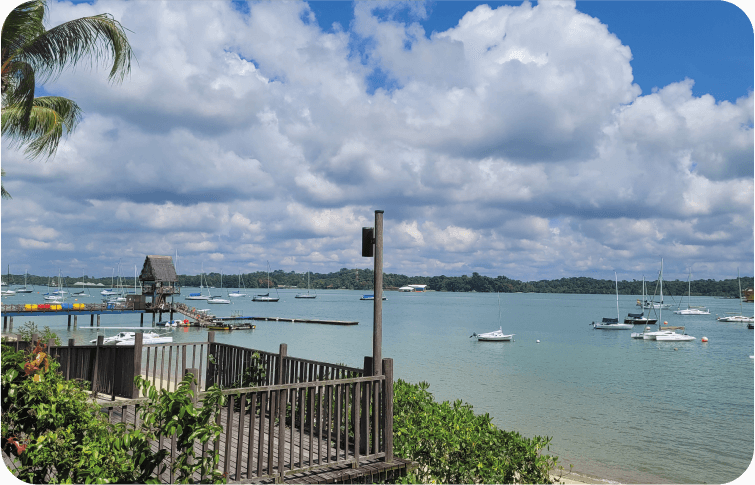 Did you know why Changi was once known as the “”Gibraltar of the East”” or that there are 9 Heritage Trees hidden in plain sight amidst the lush greenery of Changi? The Changi Military and Nature Trail takes visitors on a deep dive into the military and natural history of the Changi Cantonment! Highlights of this trail include the Old SIA Sports Club and Lorong Bekukong, where the old Changi Police Station used to be located. The trail is a great way to learn about the rich military history of Changi and appreciate the beauty of this unique corner of Singapore.
Click on the map icons to explore Changi Village!

Hop on our Food and Old Shop Trail to meet the many stall owners who have called this neighbourhood home for decades! From textiles and watch repairs to sundries, a wide variety of shops are compacted into the one-stop Village Centre! Be sure to strike a conversation with the jovial Mr Lai from Sincere Sundry Shop or grab the ‘Best Karipap’ at Block 1! The Food and Old Shop Trail is the perfect way to thoroughly experience the warmth and hospitality of Changi Village’s long-time residents!
Click on the map icons to explore Changi Village!

The Changi coastline is than just sun, sand, and sea – troves of rich heritage await your discovery! The Coastal Heritage Trail will take you on an adventure to uncover the stories of Changi Beach, Pulau Ubin and Pulau Tekong’s past and present communities. From the Changi Boatel to the old Kampung Tekong, pick up fun facts while enjoying scenic views and lush greenery along the way! This trail is a great way to explore this iconic coastline whether you are a history buff or just looking for a relaxing stroll!
Click on the map icons to explore Changi Village!