Althought Smith Street has undergone numerous rounds of change, vestiges of its illustrious past can still be found if you look close enough! Embark on 3 unique trails at our festival village which will take you back in time for a taste of a different Chinatown!

Smith Street has been home to many things over the years. Once known as ‘hei yuen kai’ (Theatre Street), Smith Street was the centre of a thriving Cantonese opera scene, with the Lai Chun Yuen Theatre as its crown jewel (36 Smith Street). Street hawkers would also line Smith Street, selling laksa, prawn noodles and chicken rice amidst other local delicacies. The street was also a popular place for fresh vegetables and other produce until 1983 when most of these hawkers were relocated to the present-day Chinatown Complex.

A portion of Smith Street was later converted into an outdoor eating area and was known as ‘Chinatown Food Street’ in 2001 and in 2014. The street was frequented by locals and tourists who showed up in droves to indulge in all-time favourite hawker fare, such as minced meat noodles, fried oyster, satay and BBQ seafood until its closure during the pandemic.

The Smith Street of today may be vastly different from its past but it has no doubt retained its charm and character. If you look closely enough, you can still find traces of the past in the architecture of the shophouses and the historic businesses that line the streets. Thread between the past and present and rediscover Chinatown Smith Street with us! 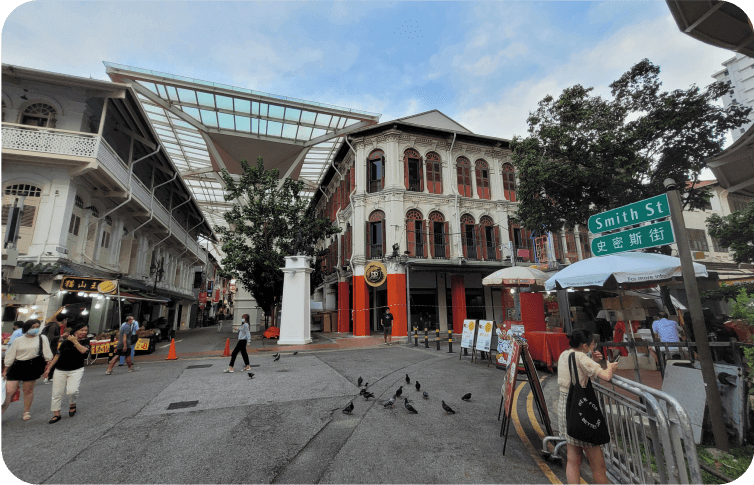 Programmes
Trails
Click on the map icons to explore Chinatown!

Travel back in time on the My Kreta Ayer Trail and get a glimpse of what life was like on Smith Street. Visit the old shops that have seen the area’s many changes, such as Nam’s Supplies and Vitatron & Medical Co! These stalwarts of Smith Street know the changes to the area better than anyone else and will have unending stories to share! Be sure to also check out My Kreta Ayer Time Machine Gallery which will juxtapose the present-day streetscape with archival pictures of 1985 Kreta Ayer!”
Click on the map icons to explore Chinatown!

While Smith Street might not be known as ‘Theatre Street’ anymore, it remains a hub for many performing arts troupes and cultural associations! When exploring our Clans & Associations Trail, you might just hear Cantonese opera emanating through the walls of the Chinese Theatre Circle or pick up the sound of the jinghu as you walk past Ping Sheh’s rehearsal studio. Re-familiarise yourself with traditional Chinese art forms, from calligraphy and seal-carving to poetry writing, which represent slices of traditional Chinese culture integral to our roots yet increasingly foreign to us today.
Click on the map icons to explore Chinatown!

Had a long walk? Relive the good old days of Chinatown Food Street on the Food Trail! A wide variety of delicious Chinese food await your tasting on Smith Street! Stop by Noodle Man to meet Mr Huang, an expert fourth-generation chef, for a taste of his hand-pulled noodles. In the mood for a snack? Two traditional pastry shops are within reach — Leung Sang Pastries and Tong Heng! And to top it off: it’s never too late for an aromatic cup of kopi at Nanyang Old Coffee! Be sure to come on down and explore the delicious treats and the stories behind them on our Food Trail!
Click on the map icons to explore Chinatown!